How to use the showel and the probe 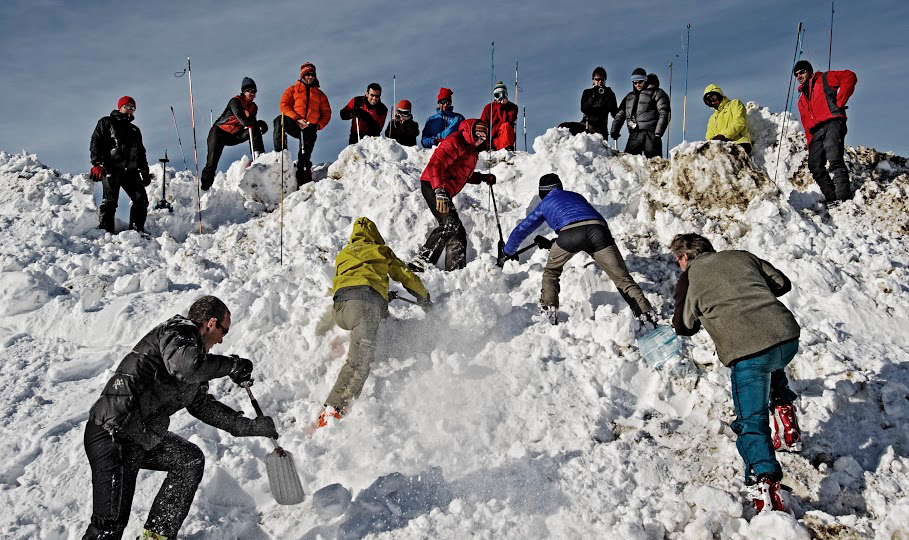 Once we have found the strongest beacon signal we may mark this position on the snow in order to not loose it.

This position will be the first probing point. From the first point we will do the same each 25cm inspiral. To probe correctly one hand must be on the snow surface to guide the probe, the other hand is the one that push the probe inside the snow. It is important to distinguish between the different types of resistance against penetration:
Smooth and sticky resistance: ground.
Smooth resistance and rebound: body of the victim.
Hard and metallic resistance: rocks, skis, helmet…

Once we know where the buried person is, we will leave the probe on that position as an indicator. The next step is to dig him out. Shoveling is a hard work, so it’s important to work as a team to be as fast as possible.

While shoveling, the priority is to safe energy and time. The shortest and fastest way to get to the victim is by shoveling horizontally. The probe let us know where the victim is and how deep is he.

So going down on the slope first and then digging front side we will get easily to the buried. For digging, one person on the front line digging to the victim removes the snow. The other members of the team may be on his back removing the snow that the first sends back. This technique avoids the snow to fell into the hole again. It is recommended to make short reliefs (around 30 seconds).

Once we get to the victim we have to remove the snow from his mouth and nose without moving him.

This article is not an avalanche rescue course. We recommend a proper avalanche security and rescue formation.

Splitboarding and AT boots

Tuning and reparing your splitboard

Tuning and reparing your splitboard