Miikka’s view on the funnel of consequence.

It all started with a scoping mission on a perfect day; Jarkko had been looking topo-maps and found these crazy-looking formations on a huge rock wall that might rideable. At the end of a valley in northern Norway, we found a massive crack in the rock. It was kind of a couloir, but looked more like a piece of cake taken of the mountainside. It looked intimidating and mesmerizing at same time. It looked totally rideable but also had a crux at the bottom – two ice fall drops. 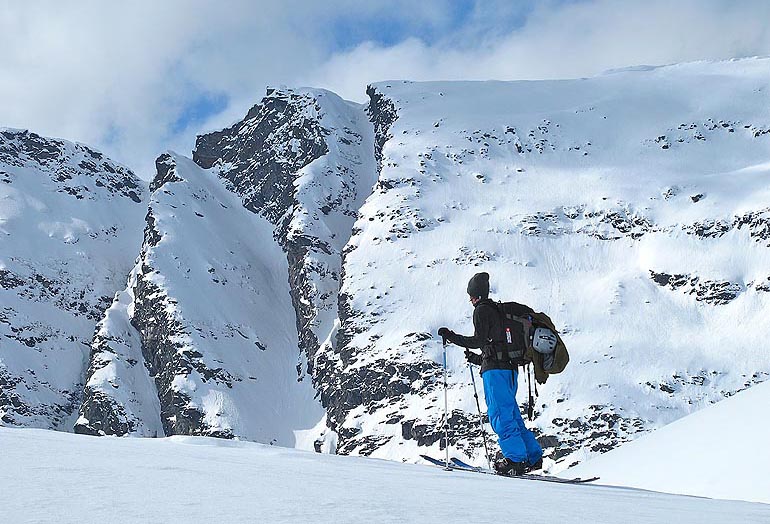 It looked intimidating and mesmerizing at same time. It looked totally rideable but also had a crux at the bottom – two ice fall drops.

A few weeks later, in mid-May, we decided to have a look. Jarkko, Aadne Olsrud, Tero Ainonen and myself, took a backdoor approach to the north facing couloir, taking a different valley in and hiking over the mountain. It took us 6 hours to reach the entrance. It was massive. Vertical drop of the couloir was 800 meters. The vertical rock wall on the riders left followed the run down all the way. The couloir funneled down, had a narrow exit and those ice falls at the bottom; a freaky looking thing. There were big wind lips hanging from the wall, which made the run extremely exposed. It took us an hour to assess the snow, make the decision and find a safe entrance to the thing. Snow was stable and everything looked good. There were some clouds gathering at the top but we were more scared of the sun heating the wind lips. I thought the clouds were decreasing that factor.

At the top, we assessed the risks for a good while. I remember being skeptical and really scared of the exposure; if anything would slide or fall on us, that would be it then. There was nowhere to hide. But the snow seemed really stable and it wouldn’t take too long for us to get through the thing. We decided to drop in. The run was awesome. Snow was still great powder although it was mid May. We stared at the vertical rock wall in awe. The whole setting was unbelievable. 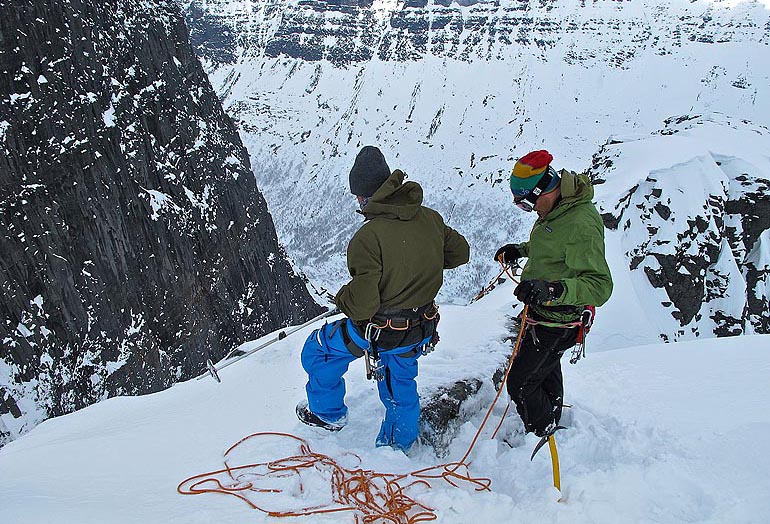 Just when were about to start riding, a massive avalanche exploded over us.

Everything went perfectly well until we reached the cruxes at the exit. There was no place on the rock to attach the ropes, and the ice quality was not good either. We had to dig the ropes in to the ice and snow. We were stuck at the exit for an hour and a half, way longer than we originally thought it would take. I rappelled out first and walked into a safe spot, a crack in the rock, to wait for the others. 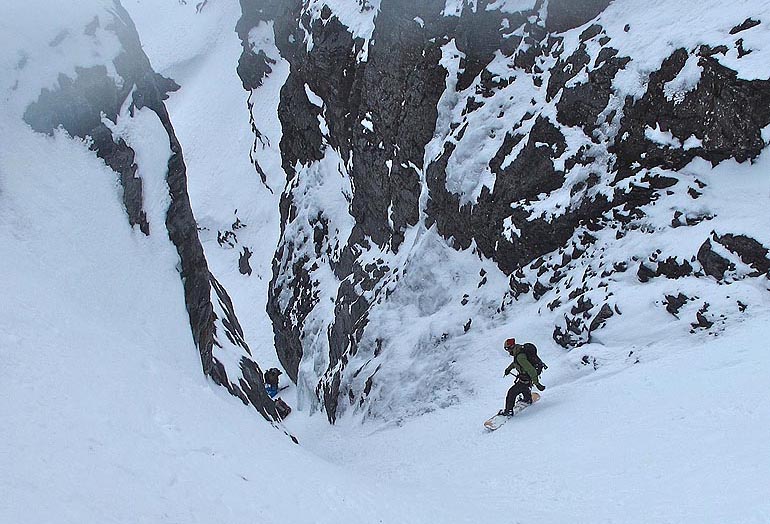 Scoping other possible lines on the way up. | After more than 6 hours approaching it, we explore the entrance and evaluate the risk. | The funnel of consequence: more than half a kilometer wide at the top, less than four meters at the narrowest part. | We were in shock for some time, but alive after all.

Jarkko came last and strapped in. He threw the ropes to us and rode down. We packed the ropes, strapped in and I was about to drop in after Jarkko when we heard a sound. We looked on the opposite south-facing wall to see were it had cracked, as it had done earlier because of the sun, but saw no movement. Then we heard Jarkko screaming below: “TAKE SHELTER!!!!”

The roar came from above us. Just when were about to start riding, a massive avalanche exploded over us. We hid back to the crack and clinged against the rock. It felt like the rock was moving too. The snow was starting to accumulate on our feet and we climbed a little higher as the snow was still spitting out of the couloir exit we had just been in. It took few minutes before the snow stopped. We were in some sort of shock but alive. We had just literally dodged death. Our legs were shaking as we rode down to Jarkko, who was already thinking that we were gone. Happy reunion. 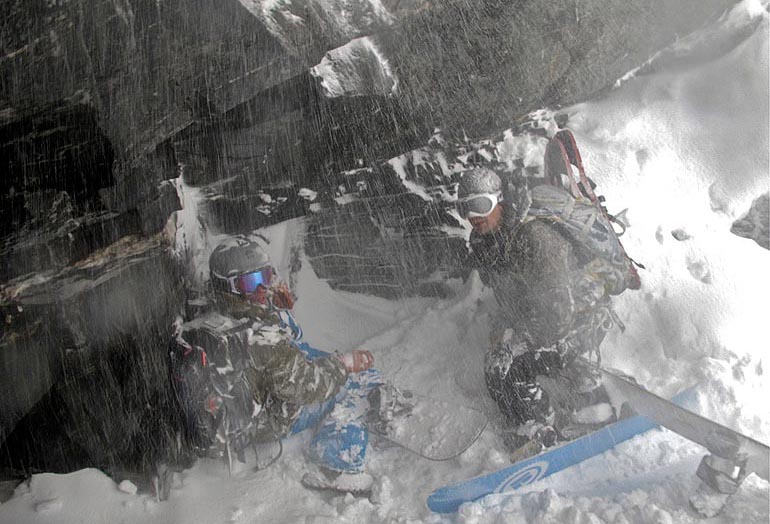 What happened was the exact thing that we feared the most, but luckily we were not in anymore. At the end, Nature gave us a warning that made us feel tiny and grateful at the same time.

We could not believe our luck. We were stuck in the couloir about two hours in total and we could have not spent another minute in it. We wondered where and why the wind lip broke at the top. The clouds must have turned rainy or something. We could only guess. All we cared about was that we were all standing there. It was a great first descent and hopefully the last to that couloir.

What happened was the exact thing that we feared the most, but luckily we were not in anymore. At the end, Nature gave us a warning that made us feel tiny and grateful at the same time. There was still a way to go down the valley through the rotten snow. It was really heavy, with the tired legs, but after that experience it felt good to be able to do it. We reached the car after 13 hours on the mountain. It was the longest day trip ever, one that I will never forget. Lesson learned.

Nutrition for mountaineering and alpine sports

Nutrition for mountaineering and alpine sports