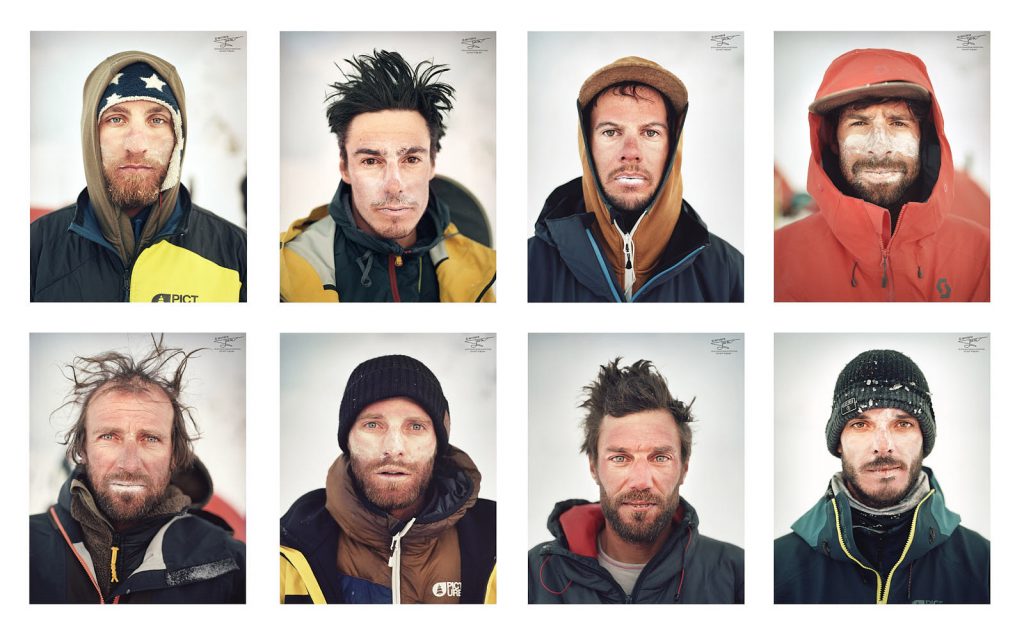 Jérôme Tanon’s latest film, Zabardast, has been in the mountain film festival limelight since its release late December. An extremely down-to-earth, overwhelming film, which showcases the reality of a group of friends embarked in the adventure of their lives, in -probably- the most beautiful mountain range in the planet: the Karakorum.

1 – Once you start thinking about organizing this expedition, how do you introduce in the project the idea of turning it into a film. In the end, how relevant does the film become in the project as a whole?

When Thomas Delfino proposed the idea of the expedition to Picture, it was already an idea of make a movie on top of the trip. Thomas called me to be the photographer of the expedition, and I agreed, and later on, when Picture and Almo were looking for a director they asked me to do it. I agreed to do the film, even though I had never done one like this before. I knew how big of a task it would be but I thought it was an important thing to do. I asked them to make the movie according to my own ideas, with nobody behind my back while I was editing, and they agreed.

“The high point is the mandatory Skam La pass, at 5600m. Nobody ever went there for freeriding. Indeed, the true objectif of the expedition is the Biacherahi North Tower. Located at the very end of a quite unknown glacier, it’s a shark fin shaped face which Thomas had scoped in a book at the library. Vertical. Never skied.”

2 – Mountain themed documentary films and videos are everywhere these days. What were the main distinctive features you thought about in order to offer a different approach, to captivate the viewer with your story/adventure?

In the process of making the film, I took great care to not watch any mountain or adventure movie whatsoever; I didn’t want to be influenced. I wanted to discover it all by myself. Before the expedition, I was feeling like a soldier going at war far from home, and it reminded me of the great war film “The Thin Red Line” by Terrence Malick. I love this film so much. It was my main and only inspiration for ZABARDAST. I showed it to the cameramen Pierre and Julien before the trip.

3 – During the pre-production, how do you outline or structure the film’s screenplay? The idea of a diary with multiple tellers was something you’d previously thought of, or did it come up during the expedition?

I knew it beforehand. I knew exactly how I wanted to tell the stories, and that I would record the voices of every crewmember while they wrote their diaries. But I had no idea what would happen in the expedition, so I didn’t have a script. I opened my eyes and noted all the major events, and the most relevant ones from a storytelling point of view. I wanted the viewer to be completely hooked with the crew, up there with us, without any possible escape. So I focused the story on a few important points, which are similar to those in a fiction film, but here everything is real.

“We are still stuck in this intense blizzard. It is supposed to snow 1m50 in 4 days ! I seem to stack symptoms of altitude sickness. Headaches, nausea, coughing, sleep loss and appetite loss. I am advised to stay calm until I get acclimated. The GPS tells us we are only 3 tiny kilometers from the bottom of the first faces. So close, yet so far in this weather. Are we gonna go crazy in these tents?”

4 – Regarding the plot, the film has different tempos and turns, which allow us to live the rhythm of the expedition. How do you find the balance between the pure sports/adventure documentary film and the anthropological/social documentary implicit in every mountain expedition?

Since I was there with them, I knew that this movie could not only be about skiing, snowboarding. Riding was not even 1% of our time spent there. It was clearly an adventure before anything else, and my comrades were such characters, so different from each other yet so tight together like a family, that I wanted to tell more about them, and give them a chance to tell their of the story through their diaries.

5 – Once you were on the terrain, what came first for you, the film or the adventure?

Adventure and film were inseparable; one couldn’t exist without the other. All members of the crew were dedicated to the adventure as well as to filming, so they agreed to take the time required to film some shots. Though when times were tough, it was impossible to film anything, when even cameramen had to pull their heavy sleds, when it was so cold, or when we were too tired to do anything. But on the terrain, priority was given to the adventure, to safety. No risking your life for a shot, for a line. The camera crew was there to testify whatever would happen; not to direct some scenario.

“The Biacherahi, unique. A face like no other. Spines going almost vertically to a giant cornice blocking the hole summit ridge: I wondered where the hell they were gonna access the slope! I started to get scared for my friends. I was unaware that meanwhile, they were in danger. An avalanche slope ready to trigger, and no anchorage.”

6 – How do you live the adventure behind the lens and how does it allow you to live the experience?

As a photographer, it was an incredible trip. Not only I felt useful, but also important. It Bringing photos back from the trip was crucial, and that’s not something you say o your average photo shoot. I felt the responsibility. The experience was the same for me as for them, but I had to take a step back and look at us from a distance. I always bared in mind to take good pictures and to think about how I was going to edit the movie some weeks from there.

7 – At a technical level, what kind of equipment were you carrying? Why did you have to pick it? Camera, drone, lenses, filters etc.

How did you manage the logistics of being self-dependent with batteries and transferring/saving the footage over such a long period of time and so many km?

We had to be as light as possible, obviously, so we only took small cameras like GH5s, small drones like Mavik pro, Gopros and solar panels to charge them all. We tested everything ahead, thoroughly, because we couldn’t afford to bring any spare item. We just had a tripod, only for long shots. Otherwise all shots were hand held. No time to lose. No weight to spare. Recharging with solar panels was a constant job, and we were always walking on a thin line; we had to choose whether to charge a drone battery or a Gopro. Cameramen were aware that each shot had to be worth it. It was a huge challenge and we loved it. We can’t believe we brought back so much footage without any loss!

“Thomas is having a bad moment. He is sensitive, edgy. His U-turn at the Biacherahi has more impact on his morals than what he pretends. It’s fair. I can’t find the right words to make him feel better. His tireless positivity is gone for the first time I can remember. Physical and moral exhaustion is pushing our limits.”

8 – What was the light and framing strategy? Did you have a previously set idea or did you just let yourself carry by the adventure and the sceneries?

The most important thing I told Pierre and Julien was: don’t waste any time setting tripods or lenses, if anything is going on, film it. If somebody falls into a crevasse, film it. I’d rather have a blurry or dark shot than no shot at all. I didn’t care much about the quality of the shooting. For me, the story was by far the most important part, but in the end the boys brought such beautiful shots on top of that! Framing wise, I asked them to be shot when their were writing in the diaries, because those were my most important shots for later, and to shoot when their were waiting, thinking, reflecting, not speaking, focusing on their faces. I wanted to be in their thoughts.

9 – How do you look for the perfect balance between purely aesthetic shots and the desired photography, and the simply testimonial, explanatory shots?

Clearly the balance was set where beauty came second. Shooting whatever happened, without minding if it moved, if it was blurry, it didn’t matter. I wanted the whole thing to feel real, not too aesthetic. No time-laps, no weird effects, just good old cinematography.

“Fat come-back of Thomas on the last line of the trip ! Unbelievable. In Urdu they have a word for this: « Zabardast »: Wonderful. He carved through the slope with huge Zs without a stop. His gigantic smile was back for the epilogue of our expedition.”

10 – Besides reporting an adventure, what else does this documentary transmit?

I’ll have to ask you, the viewer! For me it was a story of friendship above all. There is also a great nostalgia that everybody feels at some point when traveling; and the movie was a lot about that. No guys hugging and laughing all the time, but on the contrary, Léo through the end saying how he is about to cry for no reason, just for being there, for living all that.

“The last day is the toughest. I can’t stand it. Knees fucked, feet crushed in the shoes, mind obsessed with the thought of a shower, meals, coke and fries, rest, mostly rest. A bed. The dream. The last kilometer is behind us, we drop the bags and lay in the grass. The villagers bring tea, eggs and biscuits. What a joy. Going back through the canyon of death feels like a good time. We fucking did it boys ! Nothing can happen to us now.”

11 – What was the most difficult part for you as filmer and director of the project?

The shooting was intense. I was sick, I had mountain sickness, physically I was not prepared enough, and yet as a director I was not allowed to fail. I always had to be there and do my best, every second. But truly, I loved it. I loved the battle, the struggle, the adventure. The hardest part was editing the film, alone in front of a screen for several months (although I had asked to be alone hahah), letting the whole summer go by without being outside. I felt like I had given months of my life for this film, but it was a good thing, since I am happy with the final result.

“Can you force people to become friends ? A trip like this one surely can. You don’t get to choose your family, it was just like that here. We became family. Packed in our tents under the storms. I love these men. That’s it.”

Merci beaucoup for your time, Jérôme.