This terrain classification scale allows the determination of the level of avalanche exposure. It is based on the physical characteristics of the terrain, and the dynamics of avalanches within it:

From this classification scale, maps are derived which allow the user to analyse the terrain; these are called ATES Terrain classification maps. To date, in the Pyrenees, the areas of Val d’Aran, Aneto-Maladeta massif, Andorra (Ransol and Sorteny), Tavascan and the valleys of Astún and Candanchú have all been mapped.  are about to publish their respective maps with terrain classification. This task has been carried out by technicians specialized in the snowpack behaviour.

This is a complimentary tool to the ATES, Avalanche Terrain Exposure Scale which enables the planning of excursions. The purpose of the evaluator is to guide the user through the objective and systematic selection of a suitable route through the terrain (using the ATES Avalanche Terrain Exposure Scale) and the current snow conditions and avalanche risk (using avalanche risk bulletins). With this tool, the user combines both sets of information and obtains a set of recommendations appropriate to the level of training and experience in avalanche terrain (caution, extra caution, and not recommended), to successfully manage the avalanche danger under determined conditions and terrain types (LAUEGI, 2015). 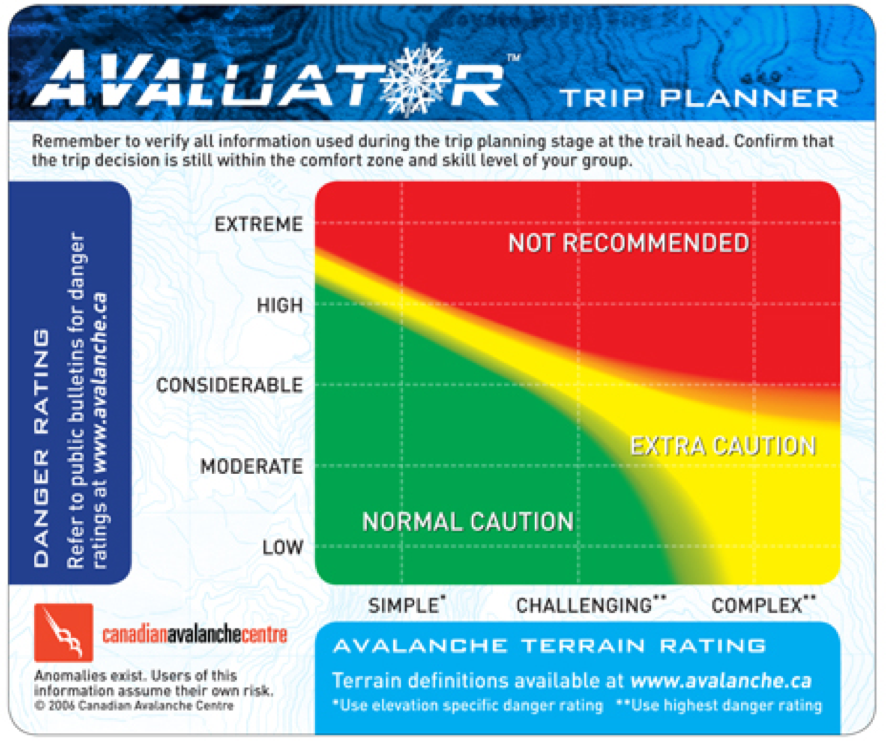 The various organisations that have developed the ATES Terrain classification maps provide the option of downloading a file which can be visualized in 3D in Google Earth. The use of the evaluator would not be expected to be fast or easy, as it must combine the information from Avalanche risk bulletin´s rose chart, for each elevation, orientation and danger level (see image 3), with the ATES, Avalanche Terrain Exposure Scale. However, ATESMAPS has created a model which processes the various elevations, orientations and danger levels, from the avalanche risk bulletin, and the ATES Avalanche Terrain Exposure Scale, in order to generate a new map which displays the information from the condition evaluator. By this means the user can directly view the sum of both data sources in one map, the Condition Evaluator Map.

The website has two distinct parts. The main page provides explanatory information regarding both ATES and ATESMAPS. There is a resource section, providing links to reference documents, allowing us to further enhance our knowledge of ATES, as well as snowpack behaviour.

The Geo-viewer is probably the area where users already familiar with the web site will access most frequently as this is where excursions can be planned. It is designed to allow the comparison of ATES Terrain classification maps and the Condition Evaluator Map. Using the buttons at the bottom of the page, the maps can be alternately activated, and deactivated. Areas of terrain classified as simple, may turn out to be “not recommended” due to the condition of the snowpack. By contrast, areas of challenging terrain may have a level of risk “caution” if the condition of the snowpack does not increase the risk of that inherent with the physical characteristics of such terrain.

The Geo-viewer allows us to upload a track (.gpx file) to facilitate the analysis of the exposure we assume during the excursion. The visualization of the route in a three dimensional environment provides the user with a clear image of the zones where there is most exposure to danger, as well as providing visual references of the area (peaks, lakes, hills, etc).

Equally important is the information linked to the area being visualized. This is located in the collapsible menu on the left and provides important information such as, the date of the maps latest update, links to the avalanche risk bulletin, the actual avalanche risk bulletin which was used to generate the condition evaluator, and the most specific weather forecast.

Contrary to what we might think, the ARTESMAPS Geo-viewer has not been designed as a navigational aid. It would seem ideal to be able to bring with us on an excursion the Geo-viewer downloaded on a smart phone with the maps for the day, but it would certainly be reckless to do so, even more so if we are not expert users and highly knowledgeable in the behaviour of the snowpack.

It is very important to note the change in spatial scale that occurs when the ATES, Avalanche Terrain Exposure Scale (local / slope scale) is combined with the avalanche risk bulletin (general / regional scale). While the first aims to classify each slope as simple terrain, challenging, or complex, considering multiple variables, the avalanche risk bulletin only provides a level of forecast for areas of a much broader scope. It is precisely this change in scale which does not allow us to obtain, in general, precise results at a local slope level.

According to Bruce Tremper, in his book “Avalanche essentials” (obligatory reading), there are three scales of analysis; general or regional scale, intermediate or mountain scale, and local or slope scale. The general, or regional scale, is the scale of analysis that is performed at home, hours or days before an excursion, and for this reason it is the scale utilized by ATESMAPS. 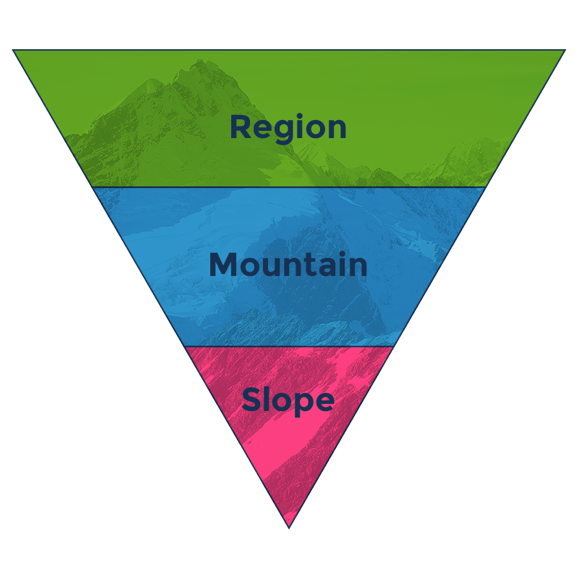 At a more detailed scale, when we are able to observe the mountain directly, we must be capable of evaluating whether or not the information from the avalanche risk bulletin and the condition evaluator maps correspond, with the actual conditions.

At a more detailed scale, that of specific slopes, the snowpack conditions that we observe and the terrain analysis that we perform in situ, will be determining in the making of decisions. The broader scale information becomes less relevant because the slopes can be affected by multiple variables which cannot be taken into account by an analysis at a regional or mountain scale.

In any case, it is recommended to have as much knowledge as possible regarding; snowpack behaviour, the capacity to analyze it, the options offered by the mountain and equipment to minimize the risks. This is not learned by consulting avalanche risk bulletins or the weather forecast, but through experience and avalanche safety training.

Up to this day, there are several countries in full classification phase of the ATES terrain, among them Canada, Spain, Andorra, Sweden or Poland. Atesmaps wants in the future to become a website where you can find all the existing cartographies. Of course, this will depend on the willingness of the different organismsto share their data

From the issuance of the cartography of the condition evaluator, many discussions have arisen between different organisms, on whether or not it is right to adjust the degree of danger at the hillside. It is true that we start from the concept that Atesmaps is a tool for planning and not navigation. Even so, it is impossible to control the good use and therefore,
we can be offering a tool that generates avoidable situations of danger,
due to the user’s little experience.

For this reason, Atesmaps has decided to do without the orientation variable of the rosette of BPA. The cartography of the condition evaluator therefore, it takes into account the classification of the ATES terrain, the degree of danger and the height.
In this sense, it seems that in Canada, this evolution of the ATES guidelines, which are in tune with how the BPA is generated, which adjusts to delimit three danger zones linked to height; alpine, scattered forest and dense forest. For the BPA of the Pyrenees, one will think of a scenario in which there are two degrees of danger for a determined altitude interval.

In this case, Atesmaps assesses the highest degree of danger and represents the entire altitude range with that danger. The positive part of this change, even if information is lost, is that they do not stop marking slopes with real danger, although they do not appear marked in the BPA, that it is based on a scale of regional analysis.

VOLCOM: BETTER FOR THE PLANET AND ITS PEOPLE

Camping on a whole glacier by Life In White