The first week of February I joined 40 Tribes Backcountry for their annual splitboard fest on the Tian-Shan mountains, in Kyrgyzstan. A trip through the land of nomads. 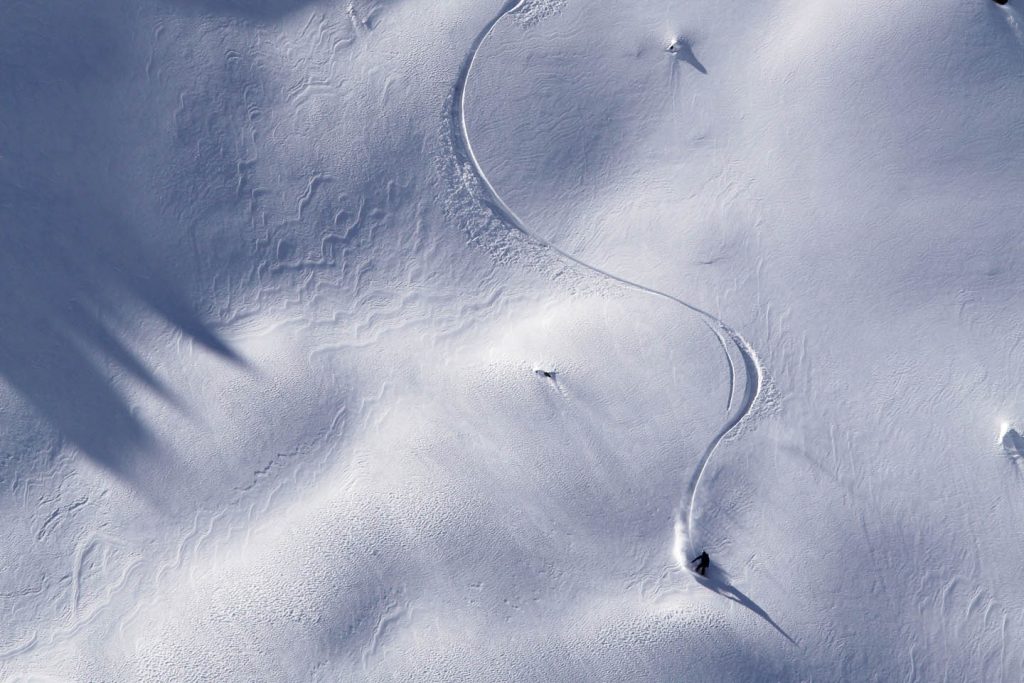 A couple of mails from Ryan Koupal -founder of 40 Tribes Backcountry- were all I needed to be all set to join their Splitfest. Over the past few years, I’ve used my splitboard as a tool to travel through different mountain ranges around the planet, not only searching for good riding, but also as a great opportunity to get to know other cultures and live outstanding experiences. Obviously, a country like Kyrgyzstan ticks all the boxes.

After a recent history of riots and ethnic conflicts, Kyrgyzstan declared its independence in 1991, after the breakup of the Soviet Union. Following the last revolution in 2010, it adopted a new constitution, which lead -finally- to political stability. From then on, adventure tourism hasn’t stop growing in a country that has been stigmatized by the past until only a few years. These days, Kyrgyzstan is a country that is truly open to foreigners, and the hospitality of its people made us feel at home. 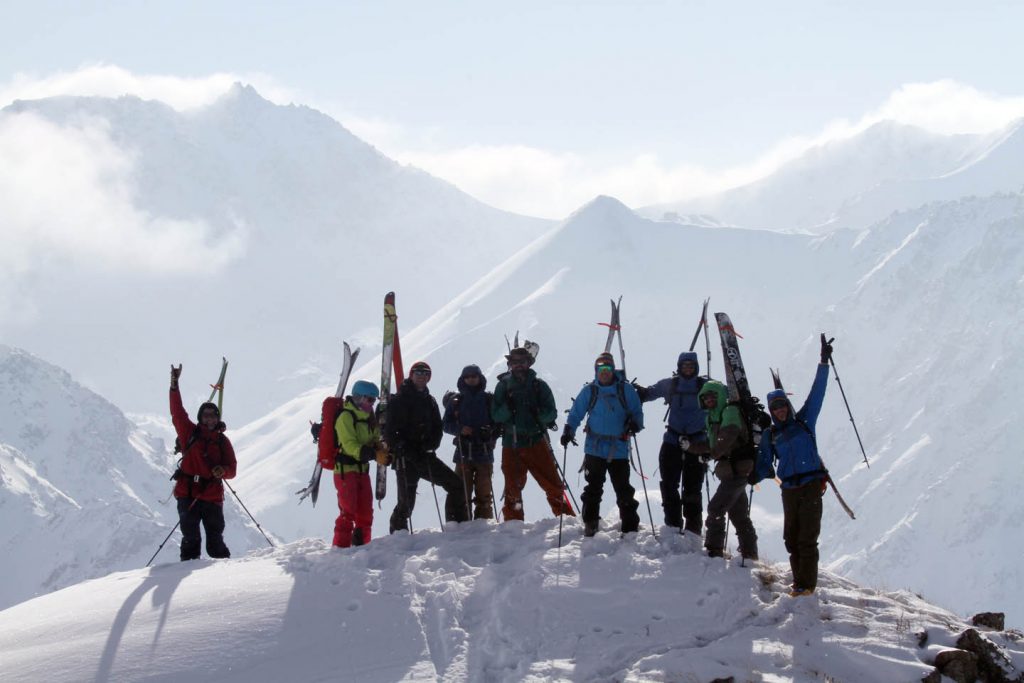 I landed in Bishkek on February 2nd at 3:00 am, after having travelled for 10 hours from the Pyrenees. After exchanging a few euros for soms – the local currency – I had a cup of tea while I waited for the rest of the crew: Annie, Tony and Addam arriving from Salt Lake City (UT) and Pete, arriving from Denver (CO). Andrew and Stefan from Auckland, New Zealand were waiting for us at a hotel in Bishkek. Not having had much sleep, we drove for over 6 hours through the 380 km from Bishkek to Karakol. It was a long road trip along the banks of lake Issyk-Kul, the second biggest mountain lake in the world, and partly responsible for the amount of snowfall in the area ‘lake-effect’. Karakol is located on the eastern-most region and it’s one of the major tourist spots in the country, especially during the summer. Once in Karakol, we dropped off our gear in the hostel and went out for lunch and a tour around the busy local market.

The group had decided to arrive a day earlier for an initial contact with the snow on one of the main ski resorts in the country. Despite the dry start of the season in the area and the resort not being at its best, the day was actually perfect to stretch our legs after the trip. Back in Karakol, an old UAZ truck was waiting to take us to Ichke-Jergez, where we met the rest of the guides: Ryan Koupal, Ty Mills –the lead guide- and Xavier Bouchard.

Ichke-Jergez is a small rural village located at barely 30 km from Karakol, where Nurbek and his family live. Nurbek works as a cook at the yurts all season long, and his house is the starting point to approach Jalpak-Tash. After a delicious local dinner and the first briefing, we went to sleep hoping the forecast for the following day was right. 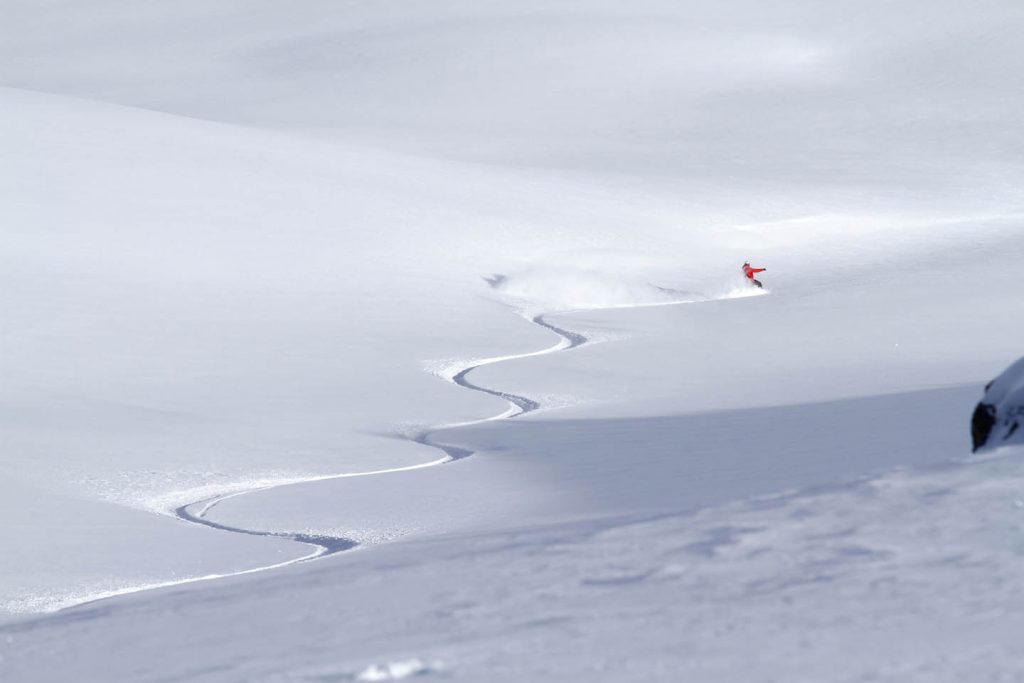 Luckily, we woke up to 15 cm (6 in) of snow on the village, as forecasted. We left everything except for the essential gear, and we loaded our duffel bags and some food on the horses. We started skinning right from the doorstep, while the neighbors were beginning to clear the recently fallen snow. The yurt camp is located in a place called Jalpak-Tash, a pasture area used by local shepherd to feed their herds during the summer. At 2600m (8.500 ft)- the camp consists of 3 yurts: one of them is used as a kitchen and dinning area, and the other two are for clients and guides. All three of them are equipped with wood stoves and are really comfy. Besides, the views over the Issyk-Kul region and the mountains of Kazakhstan are astounding. I feel lucky to call this place my home for the following days. Hands down, it’s the place to be! 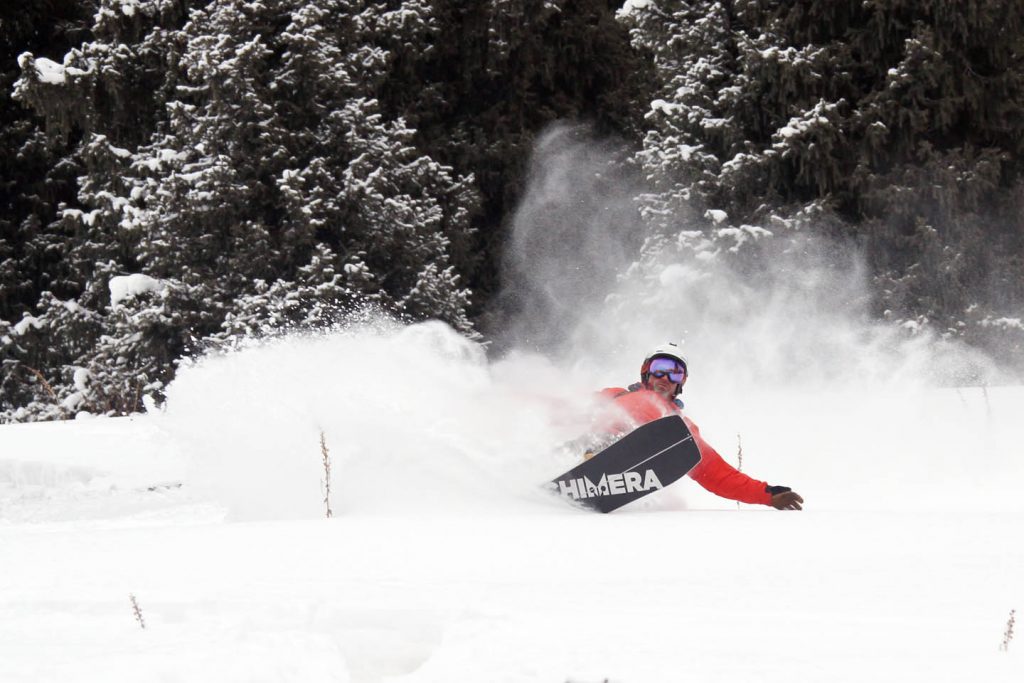 The yurt camp routine is pretty simple, but every detail is well taken care of. Every morning before breakfast, Akim lights up the wood stove before we get out of our sleeping bags, as he does before we get back from the mountain, so we can let our gear dry. Kyrgyzstan is located further from any ocean or sea than any other country, hence its extremely continental weather. The maximum temperatures during winter are really low, and although they are a bit mellower than at the valley, it’s a really intense and dry kind of cold.

The day starts with an abundant breakfast to prepare us for a full day on the mountain. Back at the yurt camp, we take a rest and a few beers before a delicious dinner, where the guides brief us shortly about the activity of the following day, depending on the snow and weather conditions.

The first afternoon we took the time to practice avalanche security on the terrain, and to have our first share of kyrpow. The storm seemed to be more and more intense and it looked like the conditions would finally be improving, after an early season worse than the average regarding the snowfall. 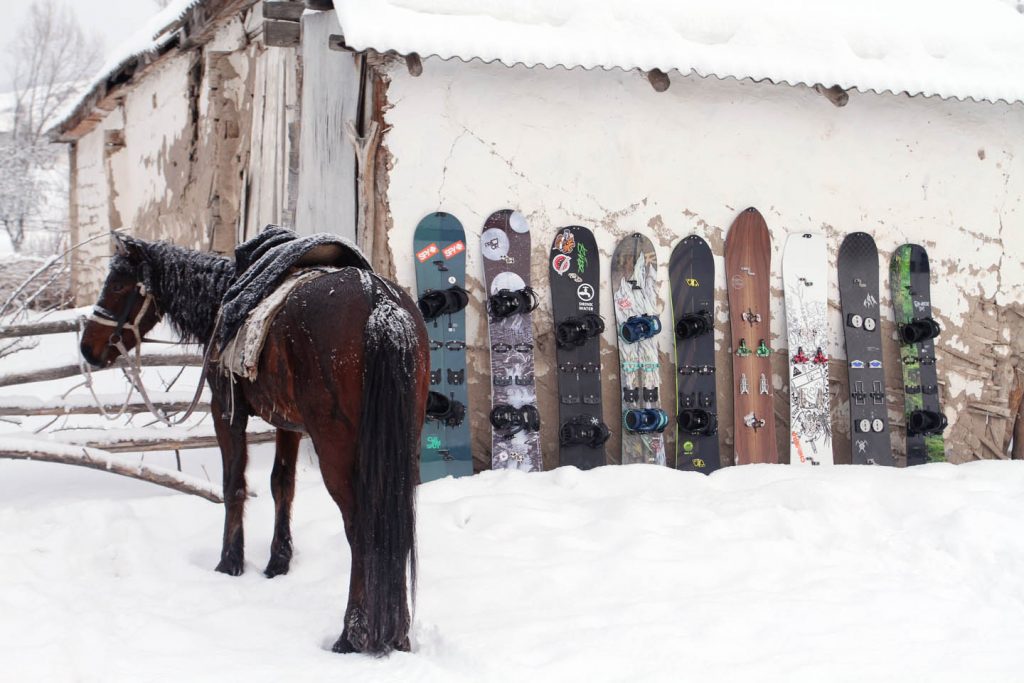 TIAN-SHAN – THE MOUNTAINS OF HEAVEN

The mountains of Tian-Shan are located in a region bordering with Kyrgyzstan, Kazakhstan and China. As I mentioned before, the climate is extremely continental: the low temperatures and high altitude result in no cohesion in the snow layer, to the point where there are no layers whatsoever. Fortunately, wind episodes are rare in the area, the main issue being some isolated snow pockets. The region of Issyk-Kul is not known for big dumps, but for moderate snowfall due to the ‘lake-effect’, followed by sunny weather days, perfect to enjoy the local snow quality. 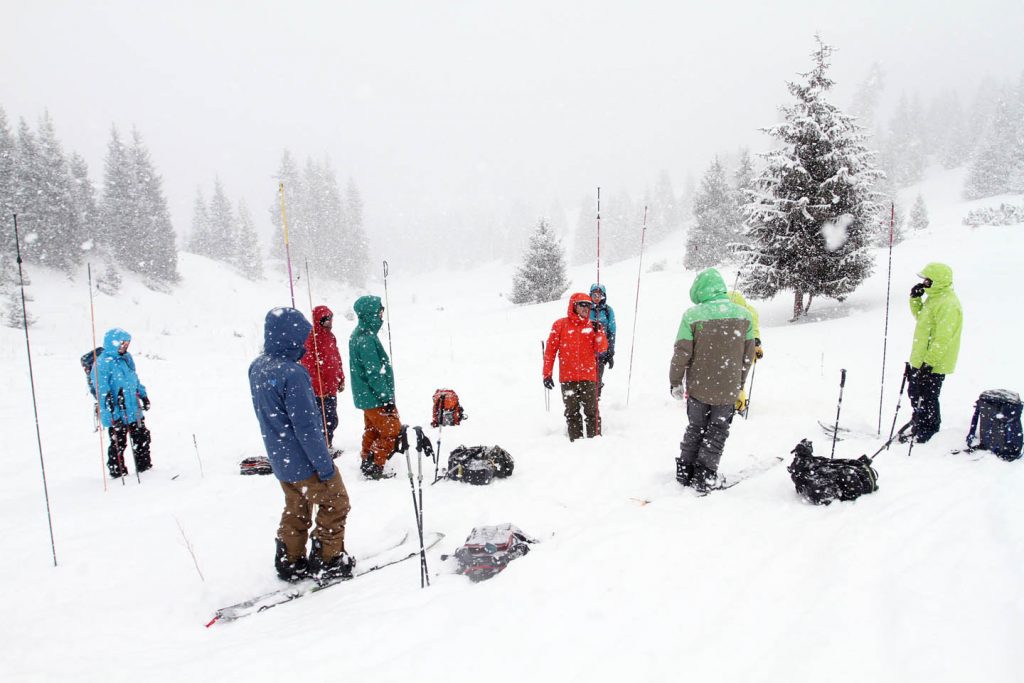 This kind of layer requires a few adaptation runs. You’ll be happier than ever to be riding a snowboard. Just bring the biggest stick in your quiver; speed will be your best friend.

The terrain around the refuge is simply fabulous and varied: from long tree lines in the woods, to huge open wide faces, spines and couloirs. The approaches from the yurt camp are really comfortable, mostly thanks to the work the guides do starting the early the season. Opening a track on this sort of snow layer can be quite exhausting. The first day, after a run near the yurt camp and dropping in ‘Yahtzee’, I find one of the reasons why I travelled there: the chance of riding big lines the first week of February. The days follow one another in high motivation, massive sprays and face shots. 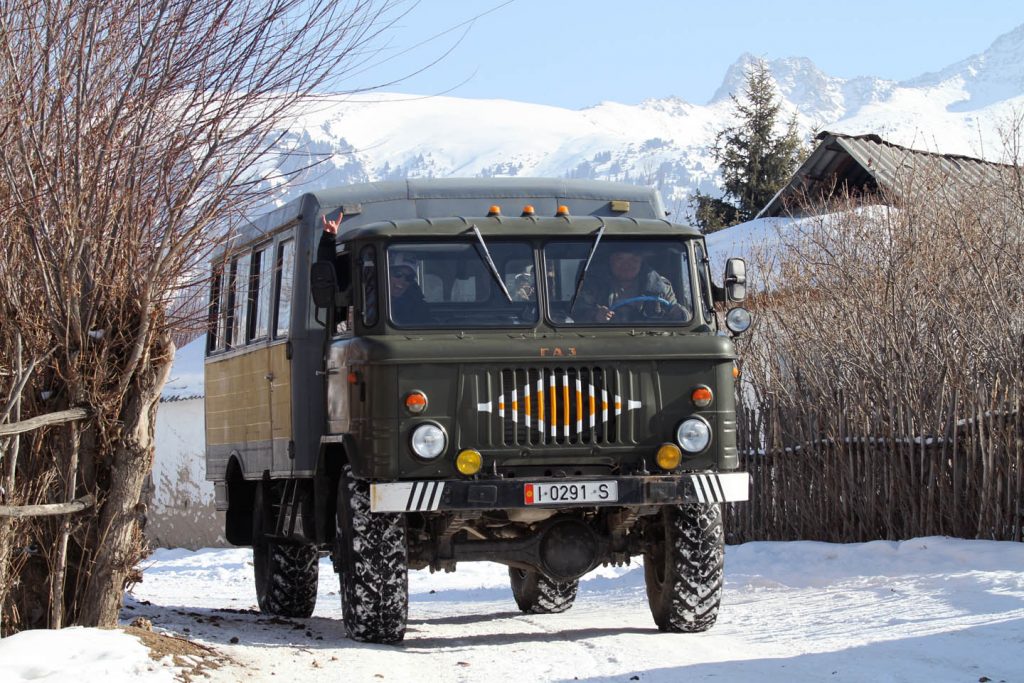 The last day, after scoring some of the most classic lines in the area, it was time to wrap it up riding ‘Yurtzee’: the area’s jewel, the kind of line every snowboarder dreams about. We celebrated it big time, drinking beer around a bonfire, under a starry sky. The perfect ending to one of my best experiences as a splitboarder.

I would like to thank Ryan again for the opportunity of joining the Splitfest. Ty for all the learning and endless encouragement, Nurbek and Akim for making us feel at home, and the rest of the crew for all the good times, the companionship and the high motivation shared all week. Make sure you check this one at least once in your life!

See you on the mountains!

VOLCOM: BETTER FOR THE PLANET AND ITS PEOPLE

Camping on a whole glacier by Life In White